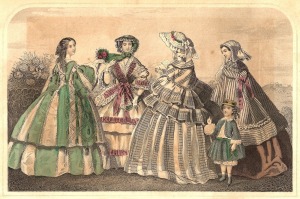 Continuing research on Spiritualism, I found this gem in a Wikipedia entry on “apport.” For the record, an apport is a psychically transported or paranormally transported object. The article reports that Terrance Hines claims in his book, Pseudoscience and the Paranormal, that “female mediums went so far as to conceal in their vagina or anus objects to be ‘apported’ during the seance.” And why might a woman so conceal an object in such a place? Because propriety trumps skepticism in the conscience of the Victorian male. They wouldn’t search there for decency’s sake. Therefore, the object would be missed and could be mysteriously produced later on.

I recently ordered Mr. Hines’s book and am eager to inspect p.51 to see how this report is validated. Whatever the substantiation, the observation is stated in terms reflective of issues raised in my last post about gender, credibility and the Spiritualist movement. I realize, without the original text, I am jumping to conclusions, but I have trouble understanding why the charge is strictly drawn along gender lines. Male mediums also have bodily orifices. Victorian females also had a strong sense of propriety and likely were stamped with modern skepticism like their male counterparts. Again, this little snippet suggests that women were perceived as particularly prone to vulgar deceit and men especially called upon by society to safeguard against such trickery. Unless Hines has specific proof that this was a female ploy only, then I’m calling foul on this one.